Erik Norberg from the Bishop Hill Colony in Illinois arrived in Taylors Falls in 1850. He spent the fall/winter in what is now Center City. Per (Joris-Pelle) Andersson's party from Hassela, Sweden (Hälsingland) was one of the first four families who arrived at Taylors Falls landing on April 23, 1851, and was met by Norberg, whose letters had enticed them to come by steamboat from Moline, IL.

Shelter was found for the women and children in the sparse settlement of Taylors Falls. The men with Norberg showing the way, headed West cutting a path through the woods to Norberg's promised land by the "Big Lake." After 10 days of hard work the way was open for families, wagon loads and provisions. At the lake the men built a 10 foot square cabin in one day which sheltered the entire party of 16 the first winter. Swedish Evangelical Lutheran Church of Chisago Lake,

The history of this first immigration comes alive in Moberg's novels. They introduce us to his fictitious characters, Karl Oskar Nilsson & wife Kristina, who are based on the real-life Per (Joris Pelle) Andersson party from Hassela, Sweden and many others that settled in the Kichi-Saga area in the mid 1800s. In 1948, Moberg visited the Kichi-Saga area to do research for his novels. 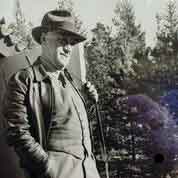 Moberg would ride bicycle from town-to-town and interview Swedish families in local restaurants and homes.

The American Swedish Institute
The American Swedish Institute, 2600 Park Ave., Mpls. The largest museum of Swedish-American history and culture in the United States. Founded, 1929 by Swan J. Turnblad. ASI is within the 1904 mansion and the new NCC (Nelson Cultural Center). Grand opening: June 30, 2012. Dedication on Oct. 6, 2012, with Their Majesties King Carl XVI Gustaf and Queen Silvia of Sweden. On the National Register of Historic Places.
Phone: 612-871-4907 or website: www.americanswedishinst.org

The Greater Chisago Lakes Area was highlighted during the 1996 Swedish Immigration Jubilee because of its direct ties to the Swedish emigrants. Over a million Swedes emigrated, many of whom came to this area because of the 1837 Indian Treaty which made these lands available to the immigrants.

version of their hit Swedish musical, “Kristina från Duvemåla” at the Chisago Lakes High School, Lindström. Double click on the photo to the right and you'll see Benny and Bjorn and the original cast members (Helen S., Anders E., Peter J. and Asa B.) at the Karl Oskar & Kristina statue on their tour with Sally Barott and Barbara Young the day before the performance at the Chisago Lakes High School.

Circle© is the name given to the 8 towns of Chisago City, Lindström, Center City, Shafer, Scandia, Taylors Falls, Almelund, and North Branch. These communities share a rich Swedish heritage. Note the "Moberg Trail" signs and the Sister- City signs on US Hwy. 8. Ride bicycle on the Swedish Immigrant Bike Trail (partial completion-website link at www.co.chisago.mn.us/481/Swedish-Immigrant-Trail). Check all locations for open times. Private tours, please make prior arrangements. Step into the shoes of Vilhelm Moberg and enjoy the Swedish Circle Tour.